The show focused on recent events in the presidential election and their effects on the candidate’s respective campaigns, including political fallout following recently-surfaced videotape material from 2005, which included comments made by Republican Presidential nominee Donald J. Trump , as well as the implications of more e-mails from Democratic Presidential nominee Hillary Clinton’s campaign, released by Wikileaks. 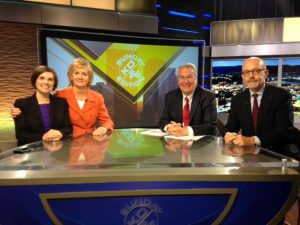 Heather S. Heidelbaugh is a Partner with Leech Tishman and a member of the Government Relations and Litigation Practice Groups. An experienced trial lawyer, Heather is based in Leech Tishman’s Pittsburgh office and has handled a wide variety of litigation matters for businesses and individuals. Heather focuses her practice on all types of litigation. She is a member of the Academy of Trial Lawyers and the Litigation Counsel of America, a national legal honorary society.

We use cookies to provide and improve your experience on our website. By clicking Accept you are agreeing to the use of these cookies. However, you do have the option to select Deny but your digital experience may be negatively impacted.AcceptDenyPrivacy policy